I saw the film “The Perfect Family”. Directed by Anne Renton the movie was one of the favourites for the new yorkers but, in the end, it didn’t win. 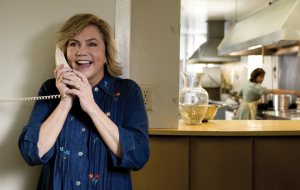 Kathleen Turner interprets a devout Catholic that always wants to keep up appearances. She doesn´t want to accept that her daughter is a lesbian, the marriage of her son ended…and she is trying to appear that she lives in a perfect and traditional Catholic family.

One day she is nominated  for the Catholic Woman of the Year, title at her local parish. She has to introduce her family to the Church committee…and the hidden problems start.

I am Catholic but I accept criticism. For this reason I recommend this movie. It is a wonderful comedy with a little bit of drama.

I hope that it arrives at the commercial cinema circuit (and if it´s possible to Spain too) because it´s a great film.