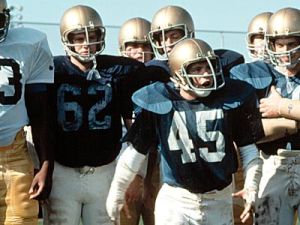 One of my favourites movies is called Rudy and it is based on a true story. Some say it is a beautiful story about a dreamer, but I think it is so much more, it is a lesson on how to be happy.

Rudy Ruettiger grew up into a lower class family in an industrial town from Illinois. Since he was a child, he was a real fan of the football team from the University of Notre Dame.

Rudy’s dream was play in the Notre Dame University’s football team and while there, receive a top quality education. But Rudy was not big enough to play American football. As Rudy was much smaller than an average football player, everybody said that he was crazy to even think about going to that college. But he never gave up.

Although he was a hard working student he did not get good grades. His High School teacher said to him: the problem with dreamers is that they are not usually doers.

And even his father said to him: chasing a stupid dream, causes nothing but you and everyone around you heartache. Notre Dame is for rich kids, smart kids, great athletes. It is not for us. You are Ruettiger. You can have a nice life. You can work in the steel mill protected by the unions and your relatives.

Only his best friend supported Rudy’s dream. When, tragically, he was killed in an explosion in the steel mill where both of them worked, Rudy decided to follow his dream of attending Notre Dame and playing football there.

Rudy started at a small junior college nearby named Holy Cross, hoping to get good enough grades to qualify for a transfer to Notre Dame. He studied hard and worked in a part-time job and only slept four hours per night.

Rudy discovered that he had dyslexia (the reason for his bad grades) and learned how to overcome his disability and became a better student. Despite all the setbacks and people telling him he was dreaming, during his final semester of transfer eligibility, he was admitted to Notre Dame University.

Rudy was the most persistent and had more heart than anyone else on the football team. In the final match on his last season, just before he got his degree, he was carried off on the shoulders of his teammates.

Since 1975 no other Notre Dame player has been carried off the field. He got his dream and he is part of the Notre Dame’s history.

So if you have a dream like Rudy, you must try to achieve it. Do not feel concerned about what people say. Never ever  give up on your dream, because as Rudy’s best friend said:  having dreams is what makes life tolerable.