Page one: Inside The New York Times 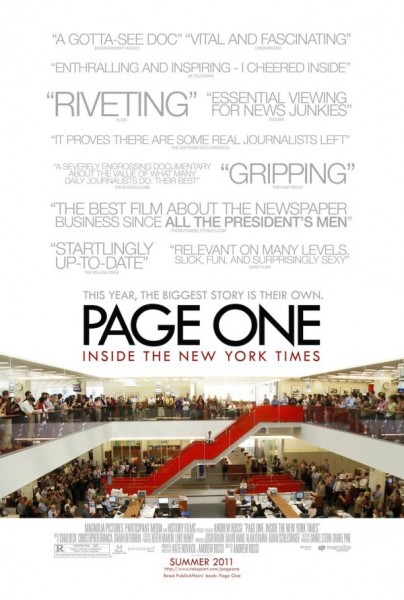 The last week I was in my favourite theatre in New York City, Angelika Film Center. I was seeing Page one, inside The New York Times.

I can not be objective this time. I love reading The New York Times, especially on weekends. I remember when my friend María came to New York to work in the prestigious magazine The Economist one year ago. The famous Spanish writer  and ad journalist, Alfonso Armada, wrote her “…buy the Times and take it at home, I love it, its touch…”

Yesterday, my friend María saw this documentary with me and my wife. I think that she enjoyed  the movie more than us and we enjoyed a lot (she loves this newspaper).

Page one is a documentary about the most famous newspaper in the world, The New York Times. The film tells about the hard  times that traditional media companies are going through. The internet is ending  the era of many written newspapers.

Even the most prominent newspapers are  suffering, The New York Times  has had to fire more than 100 workers. and this is too hard for people  in a corporate culture like The Times. In the movie you can see two women who have to leave (crying) the company in which they had been working for more than 25 years. But they did it to save the company and the rest of the colleagues.

In my opinion, things are changing very fast, and the companies must adapt to the new times. Just those companies who can be able to do it will survive . Thanks to God, there are people, like me, that prefer to read traditional written newspapers ( the touch and the feeling that you have when you are reading it is irreplaceable).

On the other hand, the documentary tells  about the  publishing of the Wikileaks documents. The editors  reflected on who has the power in the relationship with polemic web site.

Now I know that the American work culture is completely different than in Spain. One guy with a dark past (ex crack addict), like the famous journalist David Carr, was given an opportunity in USA that in Spain he would not have had it. And now, he is a terrific writer.

In America people think that when you make a mistake, thanks to your bad experience, it is  unlikely that you will repeat it. While in Spain we do not give another opportunity  when the people fail.

I would like to recommend this documentary. I do not know if you can see it in the commercial theatres or in other countries, but in a couple of months you  might  see it in History Channel (who produced the movie).