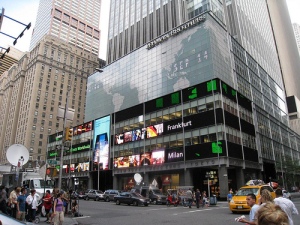 Do you remember this sentence: the price of the houses never falls? Lots of people around the world thought that this was true and they tried to buy a house as soon as possible for two reasons:

First: each day that you wait to buy a house, the price of that house will increase.

And second: If I buy a house, I will make the best investment, because the price of the houses never falls.

But… Why are all the western countries suffering the current crisis?

The former President of the United States, Bill Clinton, wanted every American citizen to have a property. He urged the bankers to lend money to everybody.

Then, people called NINJA, with No Income, No Job and No Assets got a mortgage to buy a house without any guarantee to return the money to the banks.

The rating agencies gave to those mortgages the best rating. But Ninja’s couldn’t pay back their loans. Their mortgages started to be called subprime.

The most important part of the banking business is to lend money to the people and to organisations. Later, the banks sell those mortgages as securities backed by banking loans in the Financial Markets.

Nobody would have wanted to buy securities backed by subprime loans. Then, the bankers, from asset-backed securities, created complex financial products called CDOs (Collateralized Debt Obligation). A CDO is a bond of bonds. To make it more complicated they created a new product, synthetic CDO, it’s a mix of CDOs and CDSs (Credit Default Swap).

The rating agencies, again, gave to the CDOs the best rating. Nobody understood these products, but liked that they pay a high interest. The Banks worked like market makers and created SIV (Structured Investment Vehicles) to buy CDOs. Banks and investors around the whole world bought these synthetic CDOs.

Here, in Spain, after a decade of crazy increases in housing prices, suddenly, nobody was able to buy a house because the banks wouldn’t lend money. And, people who had mortgages couldn’t keep up with the monthly payments so, the banks possessed the property. The value of the houses started to decrease dramatically and with it, the balance sheet of the banks.

Several years ago I was worried because I wasn’t able to buy a house. Nowadays I am living in a rental apartment but I feel happy for that. I don’t have a mortgage and I have more freedom to change the place where I live.